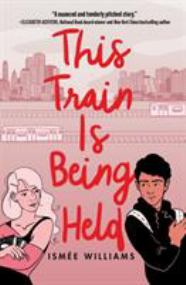 This Train Is Being Held

“This Train Is Being Held” by Ismée Ariel Williams is a New York centric love story that spans multiple years and explores the socially dynamic equalizer of this great city, the subway. When Isabelle Warren, a high school student hops on the 1 local train she sees Alex Rosario for the first time, and something about him catches her eye. Isabelle, also known as Isa is from a mixed race, privileged family who on the outside carry themselves with an untroubled sense of happiness that Alex has become accustomed to associating with the wealthy residents of Manhattan and its surrounding burros. Isa has dreams of being a professional dancer and carry herself as such. Alex on the other hand is a Dominican American who dreams of being a poet and studying the art off at college. When the teens have their first interaction their on that fateful downtown 1 train they are left with only what they remember seeing. Isa, Alex’s green eyes and his gentlemanly manors. Alex, Isa’s dancer demeanor and her untroubledness. Over the next three years these two teens would constantly ride the train together and begin a friendship that would soon lead to a budding young romance. Coming from different worlds in one city is not uncommon in todays world, especially in New York City, but when they realize that despite outside appearances they have more in common than they think. We learn that Isabelle’s mother is dealing with depression and no amount of money can lift that off of he daughters shoulders as she walks the tightrope between caring for her mother and brother who has an issue all his own. Alex’s father is of an old school mentality. He wants his son to be a ballplayer and put all this poetry nonsense behind him. Two teenagers with big dreams and creative imaginations just happen to catch the same train and the rest is history. Fate is a tricky subject with skepticism on all sides but this story is beautiful one fir al of those looking to get lost in a world where bigotry, wealth and social dynamic is not merely overlooked but overcome and fate is embraced.

Serious romantics will enjoy this love story set against racism, classism, colorism, and mental health stigma.”-School Library Journal
“YA readers will love This Train is Being Held. . .Touching on racial inequalities and prejudices to mental disorders and a negative family life, this book is extremely up-to-date with today’s society.” –VOYA Magazine