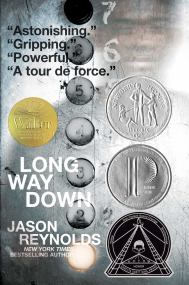 Our lives can change in an instant. I think we can all agree that one decision effects the next, which effects the next and so on. By putting ourselves in certain scenarios we not only increase the chances of a specific thing taking place in that situation we actually unknowingly more or less welcome it. But what happens when we know the risk greatly out weights the reward of a certain decision but decide to make it anyway? Can we still be shocked by the outcome? Are we allowed to feel outrage? Can we even beg the question “how did this happen to me? how did I get here?” The incredible writer Jason Reynolds takes on these questions and more in his extremely poignant novel “The Long Way Down”. The story follows 15 year old Will as he seeks revenge for the murder of his older brother Shawn. Growing up in the neighborhood Will is no stranger to the use of violence that he is ready and willing to give out, or is he? The story written in verse all takes place within the sixty seconds it should take the elevator to get from Wills apartment on the 7th floor down to the lobby where he is ready to use his brothers gun to kill the man who killed him. It’s a vicious cycle that ravages Will’s neighborhood, but those are the rules. You don’t call the police, you don’t snitch and you certainly don’t let things go. Especially things like this! With his brothers gun tucked into his waistband Will enters the elevator and presses his desired distention. Locked and loaded, tunnel vision has set in and its time avenge his big brother, the only problem is the elevator stops on the 6th floor, then the 5th and every single floor on the way down. Each time the doors open a new “person” gets on with Will. First it’s his brothers friend Buck who reveals that he actually gave Shawn the gun Will now has tucked in his pants. He even tells Will that he doubts its even loaded, something Will didn’t even think about, but wait a minute, Buck is dead! Just as soon as he realizes this the doors open again and in walks a girl around his age. He doesn’t immediately recognize her but she does him and then it all clicks. When they were about 8 years old playing on the playground a shooting broke out. Will tried to cover her, to protect her, but unfortunately a stay bullet not only hit but killed this young girl. She asks him, “what if he misses his target and his bullet, a stray bullet hits an innocent person?” Each time the elevator stops a new person from he and his brothers past gets on. All of them dead, all of them taken too soon by the cycle of violence that Will is about participate in. Or is he? “The Long Way Down” is more than a story, it’s a look inside how brash decisions can shape not just our lives but our worlds. Our lives can change in one second, follow Will and brace yourself for a ride that should only take one minuets time but can shape a generation.