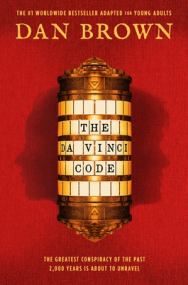 “The Da Vinci Code” by author Dan Brown is a cult classic thriller now released in a young adult adaptation! This version of the book takes you on the same action packed adventure as the adult fiction version with slight twists and turns here and there to give this rerelease its own mysterious life. Professor Robert Langdon, who in the film adaptation is played marvelously by the actor Tom Hanks is a highly regarded religious symbolist. Langdon is giving a presentation on his latest book in Paris, France which happens be quite a stones throw away from his home in Massachusetts where he teaches at Harvard University. As the worlds leading religious symbolist, he is no stranger abroad and has plans to meet a friend after finishing his lecture. His acquaintance that evening was supposed to be none other than the curator of Paris’s famed museum, The Louvre. When the professor’s friend fails to show up, the symbolist’s evening is merely beginning. Awakened latter by French police, we are informed not only of the professors dear friend’s passing but when brought back to the museum, all signs point to Langdon as the polices only suspect! This is where the story kicks into high gear and has had millions gripping the edges of their books, kindles and reading apparatuses alike. It’s now on Langdon to track clues seemingly left behind just for him to not only exonerate himself but to solve one of mankind’s greatest mysteries. The professor is joined by an unlikely accomplice, cryptologist Sophie Neveu, who’s whit and cunningness prove to be essential in completing both tasks at hand. While there are few changes to this addition of the beloved story, a new ending and sporadic revised details give this young adults release new life for a new generation of readers.

“Engrossing, prompting quick turns of the page and readings in one sitting. A satisfying adaptation for teens.”—Kirkus Reviews Online