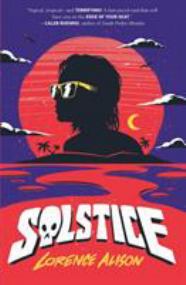 Life isn’t always fair , a concept I like to believe we all learn very early on. We all have that one “rich” friend growing up who’s seems to have it all. Sometimes that person uses their parents money to get away with being not the greatest schoolmate, friend or person in scenarios they deem to be advantageous. Adri, the main character in Lorence Alison’s young adult thriller “Solstice” happens to have a friend who’s parents are that rich, but fortunately for her Elena is not like the stereotypes listed above. When Elena and her father offer Adri an all expenses paid trip to a once in a lifetime music festival, it’s impossible for the hard working teenager to say no. Adri is from a lower income family but has always pushed herself to the best of her abilities and beyond. She maintains good grades, works diligently at her parents diner and is just about to start an amazing internship. Of course, her parents are against her going on an exclusive island getaway but for once our heroine defies her parents and sneaks off to the weekend of her dreams. The Solstice festival is billed on social media as the biggest event of the year! Taking place on a remote island with the worlds biggest musical acts, A-list celebrities and five start accommodations for its guests. With tickets coming in at a cool $9,000 before food and beverage who would think anything else? The girls learn that their tropic destination may have a secret of its own. Legend has it that it is home to a viscous monster that happens to kill people! The girls, like the rest of the people attending the event scoff at this and when they arrive ready to party all they find is lies. The hotels they were promised are simply tents, the gourmet meals are a sparsely packed food truck and the musical acts and celebrities, well their not coming either. Despite all of these let downs, things get worse when the first dead body washes ashore. Is the monster real? was this some kind of prank being played on all these rich kids? As Adri starts piecing together the clues she’s left with one more major question, if she finds out who’s behind the killing, what’s she’s going do? This story is quick but extremely fun read for anyone who’s watched or just heard about the infamous Fyre festival. Its message of not judging a book by its cover is perfect for young adult readers and reminds us that not all friendships are laughs and giggles and that sometimes the most beautiful gestures and encounters come from not the greatest circumstances.

“Part teen drama, part horror story, this is a delightful novel that readers will want to finish in one sitting… An appealing choice for younger teens and reluctant readers.” ―Kirkus Reviews