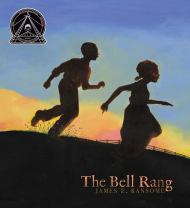 James E. Ransome is a gifted story teller and illustrator. THE BELL RANG is a dark tale of slavery, but Ransome uses language and illustration to tell his story in a way that is accessible for new readers.

THE BELL RANG is told from the point of view of a young, unnamed slave girl. Each day the bell rings and a long day of hard labor beings for the narrator’s family. Every day is the same, Daddy collects wood, mama cooks, they eat together as a family. Until one morning the bell rings, but our narrator’s brother, Ben, does not report to the field. He has escaped with two other slaves. His mother cries and the family hope that he will make it North and find freedom. Mother and father are beaten by the slave owner while our young narrator hides and fears for her brother’s life. The other two slaves who escaped with Ben are caught and “out comes the whip.” Ben is never found. The family cries and prays that he is alive and safe.

The beautifully crafted illustrations move the story along and contribute just as much to the tale as the exquisite language. Ransome’s short, concise, free-verse text paired with the stunning illustrations makes THE BELL RANG a work of art. The last page of the book shows our narrator staring at the bell that is a representation of the institution of slavery and the monotony of their enslaved lives. As she stares upon this bell, she leaves readers to wonder if she too will follow her brother’s lead and escape. An extremely powerful story best for readers aged five to eight. THE BELL RANG is educational and great for sparking a young new reader’s interest in historical fiction and teaching him/her about our country’s dark past.