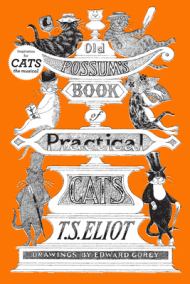 First published in 1939, Old Possum’s Book of Practical Cats by T.S. Eliot is a collection of whimsical poems about cats.  Perfect for children and cat lovers alike, this delightful book of poems, which is written in verse, tells the story of a variety of cats and their secret lives.  Each chapter is devoted to a different type of cat, and each cat possesses their own unique and quirky personality.

T.S. Eliot, a famous poet, dramatist and literary critic, received the Nobel Prize in Literary in 1948.  He is perhaps most famous for the poems The Love Song of J. Alfred Prufrock.  In 1982 Andrew Lloyd Webber used Old Possum’s Book of Practical Cats as the inspiration behind his wildly successful musical Cats, which has been made into two feature films, one of which will premier in December of 2019 (with some controversial CGI animation), starring lots of household names including: Taylor Swift, Judi Dench, Ian Mckellen, James Corden, Jennifer Hudson, Jason Durulo, and Rebel Wilson!

Originally written by Eliot for his godchildren, these poems continue to delight readers whether it be though the actual book or the stage production. The 2009 edition, published by HMH Books for Young Readers, contains wonderful full-color illustrations by award-winning illustrator, Axel Scheffler. His drawing brings to life the Jellicles, the Mystery Cat, Old Gumbie Cat, Old Deuteronomy, and many other cheeky cats.  His drawings are endearing and are sure to win the hearts of children and cat lovers.

Since poetry can sometimes be intimidating to new readers, Old Possum’s Book of Practical Cats is an excellent introduction. Also great for reading aloud exercises because of the book’s fun rhymes.  Old Possum’s Book of Practical Cats is charming and engaging, filled with adorable and loveable cats. Best for ages eight to eleven, once this book is brought home it is sure to become a quick household favorite.