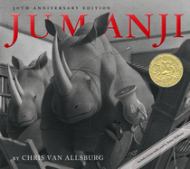 Winner of the 1982 Caldecott Medal, one of the most prestigious American children's book awards, Jumanji is an innovative story sure to pique the interest of any budding new reader. Chris Van Allsburg takes a boring afternoon and turns it upside-down. Judy and Peter Shepherd’s parents leave them unattended for an afternoon with nothing to do.  Their own toys soon grow dull and boring, so they take a walk.  Leaning against a tree they in the nearby park they see a board game. The game box has a note on it that states “Free game, fun for some but not for all. P.S. Read instructions carefully.”

Starved for something new and fun to entertain themselves with they start to play Jumanji even though the instructions state that once you start the game you must finish. With the first roll of the die a lion is in their living room, and with the second monkeys are destroying the kitchen.  Judy and Peter think of calling the zoo for help, but no one would believe them, and Judy astutely points out that their mother will be upset if she finds a lion in the bedroom. So they decide to play on until one of them wins the game so everything will go back to normal.

The realistic black and white illustrations are paired with a clever and whimsical story is a must read for kids grades two through five. Though color images may have been a fun touch to make the beautiful images pop, but the black and white does not take away from the story at all. And if your child does want some extra pizzazz, watch the 1995 film (with the same title), starring Robin Williams, which brings Van Allsburg’s creative world to life! Jumanji is for any restless child looking for a zany adventure.