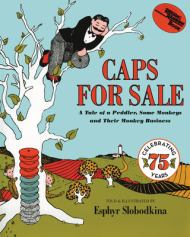 Caps for Sale by Esphyr Slobodkina is a classic children’s book that draws readers in with its silly story and repetitive monkey and sounds and cap peddlers dialogue. As the secondary title tells us, Caps for Sale is a tale of peddler, some monkeys and their monkey business. The cap peddler is out for the day to sell his wares. He has an interesting way of carrying the caps he sells by keeping them stacked on his head. The peddler’s caps are brown, blue and red and tower into the sky. After not having much success the peddler begins to feel hungry. The peddler has no money so he decides to walk out of the town and take a nap. When the peddler wakes up after his nap, he finds that all of the caps he was carrying on his head are gone. All the colored caps are gone except his own checked cap. The cap peddler soon discovers that monkeys had stolen his hats and have them on their own heads up in a tree. What happens next is an hilarious back and forth between the monkey’s and the peddler that will have children giggling and repeating the words and sounds read in the story. In the end the peddler must get clever to trick the monkeys into giving him his caps back. In doing so the peddler collects his caps and heads back to town, rested and calling the classic line, “Caps! Caps for sale! Fifty cents a cap!”. Caps for Sale is a fantastic easy-to-read book that uses repetition, patterns, and colors to engage for early readers.