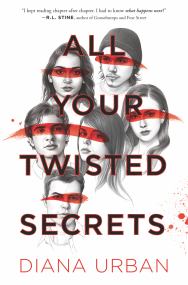 All Your Twisted Secrets

Remember what it was like being in High School? Facing the pressures of planning and plotting out the events that would inevitably shape your adult life? Being asked to think on a higher plane about future circumstances that you might be in? All while balancing, and quite frankly learning how to navigate the social nuances of society in general. Diana Urban tackles these questions in her young adult novel “All Your Twisted Secrets”. The story revolves around the lives of 6 teens coming from different rungs of the High School hierarchy. Theres our narrator Amber, the brilliant music geek who dreams of creating scores for big budget films out in Los Angles. Her boyfriend Robbie, the baseball star who despite his popularity and success on the diamond is a level headed genuine guy. Sasha, the schools darling, the prettiest, sometimes ruthless, if the rumors are true member of the student body who serves as the overlord of the schools comings and goings. Scott, our stereotypical burnout is rumored to not only partake in drugs here snd there, but also sells the illegal substances to his schoolmates. Diego is our brilliant, inquisitive brainiac who surly has the answers and a bright future ahead of him. And last but not least there’s Priya, a bit of an outsider who prefers to sit alone, keep to herself and practice her magic tricks. Six individuals on different paths from different backgrounds, sound failure? If not, I highly recommend the classic movie, “The Breakfast Club”. Urban takes the classic tale of High schoolers situated on varying steps of the preverbal popularity ladder and throws in quite the twist. When the six students we met above are all invited to a scholarship dinner at local restaurant the evening is just beginning. Once they are seated in a privet room the doors are locked and bread baskets aren’t the only things on the table. A syringe which is filled with what we find out to be poison, a literal ticking time bomb and a note instructing them that they have one hour to decide who gets the needle. The alternative to not choosing who gets poisoned is the bomb will go off and they all die. Its now up to our six teens to figure out who has trapped them here, why them and most importantly, is there a way out? Over the course of the hour we discover how the teens are connected, what they’ve supposedly done to end up where they are and how they plan to handle what’s to come in their futures. That is, if they can get out in time.

“Urban’s debut is a powerful one, rich in emotional turmoil and intracharacter conflict, with a strong message against bullying and a focus on standing up for oneself and one’s goals.” ―Publishers Weekly
“A compelling thriller… readers will be captivated as layers of each teen’s life are peeled back to complicate the mystery.” ―School Library Journal
“The Breakfast Club meets One of Us Is Lying in Urban’s adrenaline-fueled thriller, pitting the six teens against one another in a satisfying and delightfully claustrophobic ode to Agatha Christie.” ―Booklist