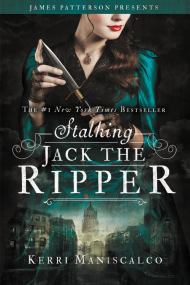 What happens when you take a historically horrifying true story and add a few new, fictional characters to the plot? Keeping historical details clear and relevant throughout a story while adding and embellishing can sometimes be troublesome for writers no matter their experience or accolades. Fortunately for fans of this, James Paterson the esteemed authors new children’s imprint has published Kerri Maniscalco’s thrilling journey into the past “Stalking Jack The Ripper”. Plenty of children wish they had grown up rich, to have been born into nobility with life laid out silkily smooth in front of, I mean for them. For seventeen year old Audrey Rose Wadsworth no wishes were needed as this was her reality. Daughter of a lord in 1880’s Victorian era London, she was expected to attend dress fittings, sip tea with friends and discuss romantic interests and the suitors deemed eligible by societies standards for not only her, but her acquaintances. Audrey however is not one who cares for age old societal acceptabilities especially those forced onto women. Her interests lie in the sciences, not fancy gowns and new age appliances. Her curiosity is highly peaked by forensic science, the understanding of the body and what we can learn from it after death. How said cause of death is determined and what can be learned by studying the deceased. This is of course looked down upon and given her fathers position in life, our young freethinking heroine is deterred at all costs from pursuing what has become her passion despite how morbid it may seem. Audrey though does not let this stop her from visiting her uncles laboratory and going to work on the cadavers. It’s there that she meets Thomas Cresswell, a student who unlike Audrey, believes he or at least comes across as if he thinks he’s better than everyone else around him because of his families socioeconomic standing. As Audrey says in the book “Pretend I am as capable as a man?

Please, sir, do not value me so little!” she is determined not to let anyone tell her what to do or how to live. This all comes to a head when a brutally wounded body comes through the morgue and not only has this young lady had her life taken so soon, she’s worked in Audreys family’s house before! If she was mildly obsessed with solving the curious yet harrowing case of Jack The Ripper she is now. How far will that obsession take her? What will it make her do?

“An entertaining debut full of twists and turns, perfect for fans of historical fiction and mystery.”―School Library Journal

“Maniscalco has created a serious, sharp-minded, and forward-thinking protagonist in Audrey Rose, whose fearlessness will endear her to readers looking for an engaging historical thriller. Abundant red herrings and a dash of romance round out this gruesome but engrossing story.”―Publisher’s Weekly

“Audrey Rose Wadsworth prefers breeches to ball gowns, autopsies to afternoon tea, and scalpels to knitting needles. Though her father, Lord Edmund, has forbidden it, Audrey covertly studies forensic medicine…while “the Ripper” remains two steps ahead, lurking where Audrey least expects….Maniscalco’s portrayal of scientific invention in a newly industrial era will serve as a fine first foray into Victorian classics.”―Booklist