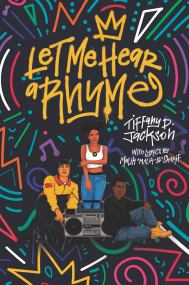 Let Me Hear a Rhyme

Friendship is paramount, to me at least. Growing up an only child in a neighborhood full of kids my age give or take a year in either direction, I quickly formed bonds that at the time without knowing deemed stronger than your average friendship. Sleepovers were common, we all knew where the cups, snacks, dinner plates and paper plates were kept. My Mother would often say to my friends, “go ahead you know where it is!” when they were over and asked for something to drink, a sweet treat or simply to jump in the pool on a hot day. My friends became like family, my brothers. We looked out for one another, made sure everyone was home before the streetlights came on and most importantly, we supported each others dreams no matter how far fetched they might have sounded. Tiffany D Jackson’s “Let Me Hear a Rhyme” takes us back to the days pre internet when hanging out, sitting outside and listening to your favorite CD’s was all it took to have a good time. “Let Me Hear a Rhyme” follows Quadir, Jarrell, and Jasmine as they celebrate the life of their best friend and in Jasmine’s case older brother, Sreph. Tragically, Steph’s life was cut far to short but his three closest friends refused to let this tragedy be just another statistic misrepresenting life in the late 90’s of young African Americans in Bedford- Stuyvesant, Brooklyn. Following in the footsteps of fellow Bedstuy rapper Biggie Smalls, Steph was known to put pen to paper and string together lyrical symphonies using the vocabulary and dialect the people from not just his neighborhood but all of Brooklyn could embrace. Jasmine, Jarell and Quadir began selling CD’s of Steph’s music and soon it came be heard blasting on boomboxes and ringing out of storefronts. Of course major record labels catch wind of the new artist out of Brooklyn and start requesting meetings and offering up record deals. The only problem with this is Steph is dead and his friends haven’t really mentioned that in their marketing of his music. The lies begin to build as they create a new stage name and build the persona of “The Architect”. As Steph’s popularity grows the three are faced with the challenge of not only keeping up with their lies but coming to terms with what really happened to their friend. They each have some skeletons hidden and need to learn to fully lean on each other before everything they’ve worked so hard to build comes crashing down.

★ “Jackson repeatedly proves that she is a titan among her peers, and her latest novel is no exception…  Jackson weaves the three points of view together seamlessly, creating richly drawn and authentically real teen characters.” (ALA Booklist (starred review))